I will repeat again and again that co-operatives are not peculiar inventions of Robert Owen or other socialist thinkers. They existed all throughout human history but under different guises. Paraguay Reductions depicted in the film “Mission” were in fact co-operatives established by the Jesuits, similarly to the largest contemporary worker co-operative, Mondragon, which was also started by a Jesuit – Father Jose Maria Arizmendiarrieta. Few people know that St Benedict’s rules of organising community work and life was not for monks, but for lay people. Founders of the first Rochdale co-op, and in fact, the founders of the co-operative movement, simply institutionalised what was in human values all the time. This institutionalisation and concretisation permitted the spread of the co-operative model and values all around the world. Cheng and Fleischmann (2010) have analysed the 12 most popular inventories of human values used for business purposes. They arrived at a Meta Inventory of 16 values that were present in all of the inventories.

I believe all companies and organisations should be based on the same universal human values. When we benchmark, we are looking for a successful company, and this model has certainly been proven as a most humane business model in history very close to another traditional model that of the family company. Those two models not only do not compete or contradict one another but, in the case of producer co-ops, credit unions or consumer co-ops, create organically supportive clusters. In the table below, I gathered all the groups of values I mentioned above to show how the values intertwine. 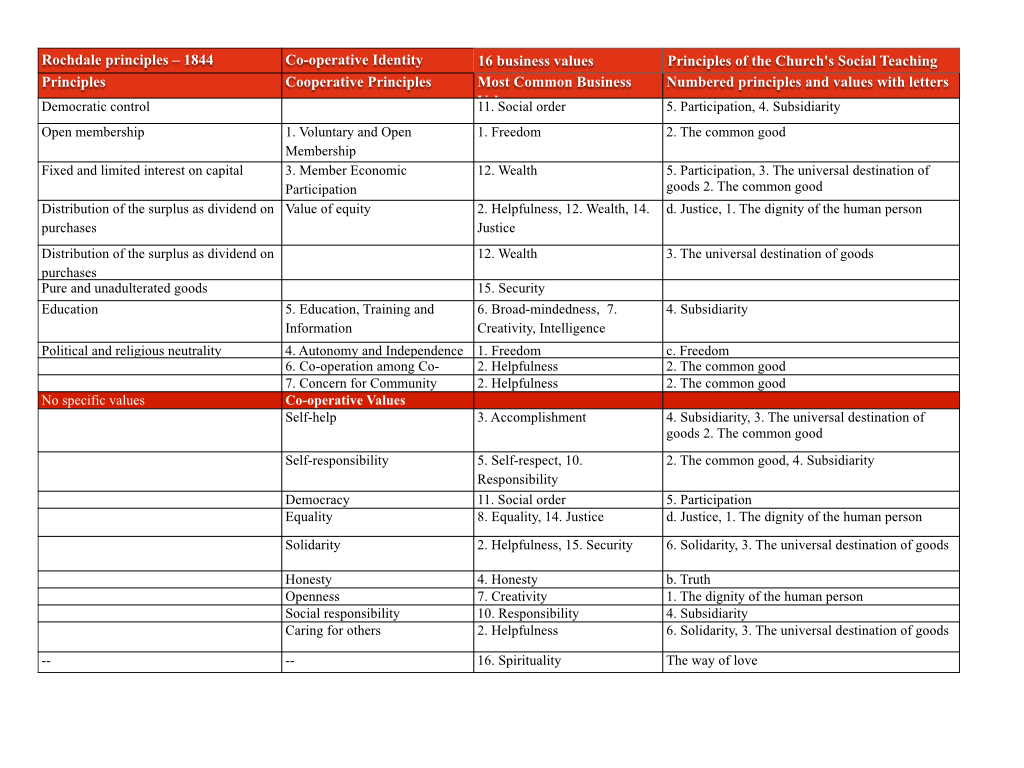 Co-operative values are, in fact, a specific expression of General Values and Principles of our civilisation. If so, they cannot be limited to the sphere of our work life. They permeate both our social and private lives. I call organisation where it happens simply “participative companies”
Co-operative values could reveal the truth about human beings, especially in the work context, and, perhaps, also explain the underestimation of the co-operative sector and ways of overcoming it. Their advantage over the Cheng and Fleischman’s  classifications as well as over Catholic Church principles is that co-operatives are real enterprises that employ 250 million people all over the world and openly manifest by their name or declarations that they identify with these values and principles. The question is to what extent they and their employees or members implement those values in their lives..

I invite you to test how your place of work adheres to these universal values.